“Is the Pope a Catholic?” 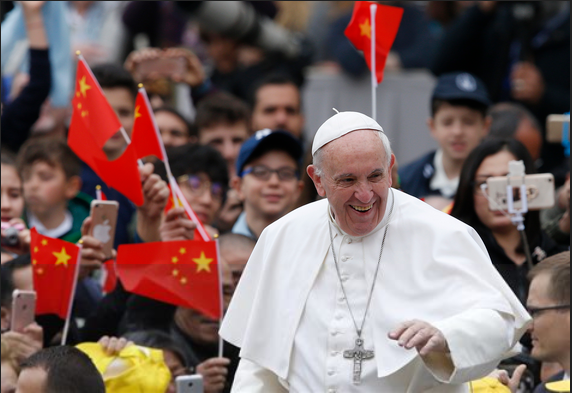 That used to be a rhetorical question; an expression to affirm the obvious.  It’s been a favorite witticism of my aunt, a staunch Catholic.  Now however, it may be a legitimate question.

This month, Pope Francis has capitulated to the Communist Chinese government on the appointment of bishops.

As reported in The Wall Street Journal, “Pope Francis has decided to accept the legitimacy of seven Catholic bishops appointed by the Chinese government, a concession that the Holy See hopes will lead Beijing to recognize his authority as head of the Catholic Church in China, according to a person familiar with the plan.”

A delegation from the Vatican has asked Bishop Peter Zhuang Jianjian and Bishop Joseph Guo Xijin to step down and make way for party-approved bishops.

Historically, the papacy has refused to recognize state-appointed bishops.  In his 2007 Letter of the Holy Father, Benedict XVI wrote regarding China that the desire of the state to “…place themselves above the Bishops and to guide the life of the ecclesial community, does not correspond to Catholic doctrine…”.

It would be inherently contradictory for the Vatican to be unable to select its own bishops.

Not only is this reversal a betrayal of the “underground Catholics” but completely contrary to basic Christian philosophy.

Steven Mosher, author of The Bully of Asia has said about the decision, “On a scale of evil from one to 10, this was a 10 … absolute evil. Crosses are currently being ripped off the top of churches, and home church leaders are being arrested and tortured. … Any political party that will kill 400 million of its own unborn citizens … will stop at nothing to achieve its goals.”

“Those who best realize the social doctrine of the church at this time are the Chinese… They seek the common good, subordinating all things to the general good.”

If the Chinese government best understands the social doctrine of the church at this time, then we are living in some Orwellian times. This brutal, totalitarian government is anything but the model of Christian behavior.

Communist China continues to have one of the worst human rights records in the world, as repeatedly demonstrated through its One-child policy (resulting in millions of forced abortions) to the 1989 Tiananmen Square Massacre where the government slaughtered an estimated 10,000 of its own people.  And despite claims that it has stopped, China may still be harvesting organs from its political prisoners, and continues to persecute religious groups.

In a climate of increasing division, this is inexplicable coming from the leaders who claim they want to unify God’s people.

As noted in The Catholic Herald, “Catholics in the country are currently split between those in the ‘underground’ Church who are loyal to Rome, and those in the government-backed Patriotic Catholic Association, which appoints bishops without Vatican approval.”

In so doing the Pope has only contributed to further division.  This decision legitimately brings into question whether the current pope truly represents the spirit of Catholicism.