Competition Is Not a Sin 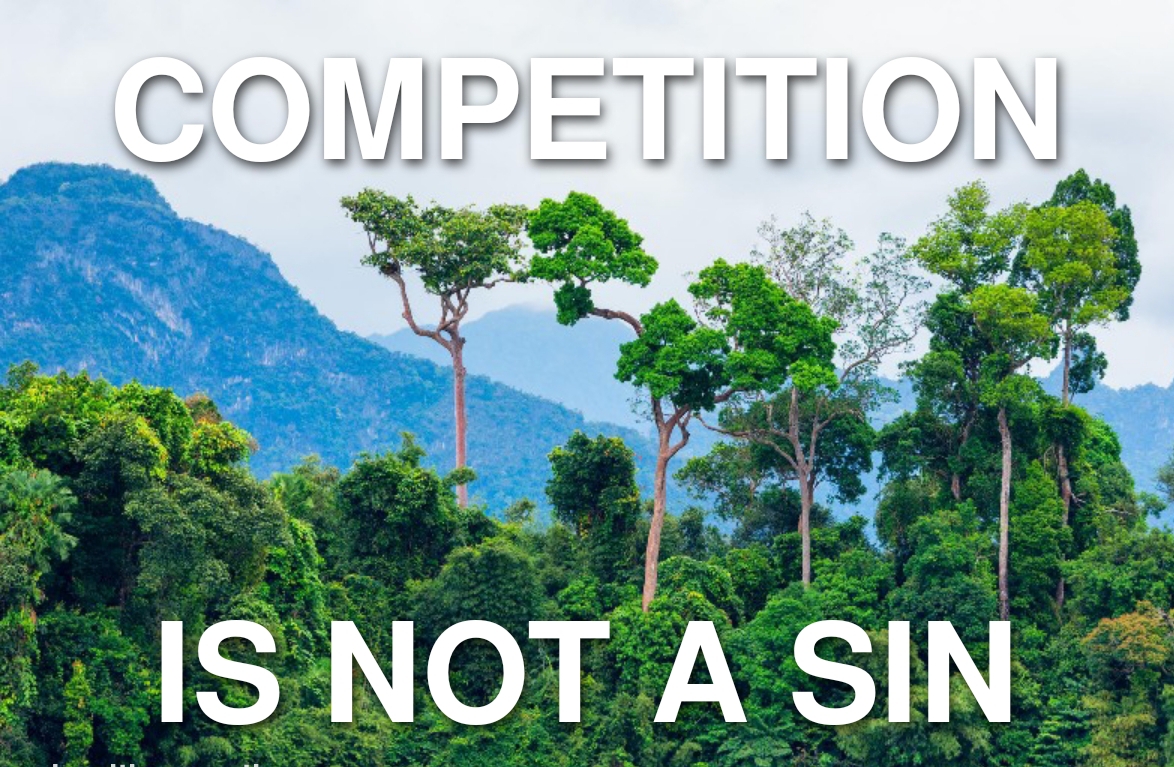 I spent New Years on the Southern Island of New Zealand a place called Seacliff – it is an amazingly beautiful part of New Zealand near the ocean about 30 minutes Sounth of Dunedin.

On New Year’s morning I was awakened about 5:30 to what I thought was the sound of a windchimes or a distant ice cream truck against the background of a cacophony of birdsongs.   As the sun began to rise, it got louder and more clear and I began to realise that those bell-sounds were also birds.

This Symphony of song got me thinking about how amazing it is that so many competing voices could be registered by their intended recipients.  Altogether, it was the song of competition in a free market.  Dozens of species of birds computing for air time with their different songs were harmonizing to create more bandwidth in an otherwise finite space and time. It’s that competition that forces such abundant and beautiful variety. Competition is natural selection. It’s a necessary driver and motivation for improvement of systems conditions.

John d Rockefeller was quoted as saying that competition is a sin. But I would argue that without competition we end up with monopolies and ultimately dictatorship and tyranny.

Of course Rockefeller would say this because at that time (in 1883), he and Rothschild were competing as the world’s largest oil and banking barons. But the two competitors each finally realized The more oil wells they drilled, the more oil was produced, the more the price of oil per barrel fell, and the lower their profits- which is why they colluded to fix prices so that they could maintain high oil prices.  But why should we support their profitability to our detriment?

There are those who would argue that competition is unhealthy for society because it means that one person must lose in a given situation but this is a very immature and short-sighted understanding that doesn’t take into account the fact that both mutually benefit when you consider that there is learning in the process of competition and and motivation to improve.  For example when I was younger and learning to play bagpipes,  I  would enter competitions to see how I measured up.   If it were not for those competitions I would not have had the motivation to improve and it was by that very  motivation that I did improve and eventually did win!

In the workplace employers need prospective employees to compete for a position so that they can get the best workers which in turn benefits the rest of us- the consumers. It is totally ridiculous to say that competition is not beneficial.  Only a Communist or Socialist (or someone who feels inadequate to compete would say that we need to eliminate competition in the marketplace or from society in general.

Without some competition in various acts aspects other lives we are denied the opportunity to learn and grow and build resilience. It also creates a marketplace of ideas where you can Observe and learn from your competitors mistakes and in any competition you can’t lose if you have learned something from it.

From article Economic Systems: Capitalism, Communism, and Socialism on  https://thismatter.com/economics/economic-systems.htm

“History has amply demonstrated that communism and socialism retard the growth of economies, because there is no competition between businesses, and the people who manage such businesses are often political appointees, chosen more for their social and political connections than for their understanding of the businesses that they manage. Furthermore, large industries are often under the control of many bureaucrats, who often issue conflicting demands. They care little about whether society wants their product or service, and do not care as much about costs, since these costs are paid by the government.

To illustrate how inefficient communism is compared to capitalism, consider the difference between the 2016 Gross Domestic Products of Germany and Russia:

Russia is, by far, the largest country in the world, with a landmass slightly exceeding 6,600,000 mi.², and natural resources proportional to its landmass. It also has a population of 144,370,000. By contrast, Germany’s land area is 137,879 mi.², with a population of 83,249,000. And despite Russia having a landmass almost 48 times that of Germany, with proportionally greater natural resources, and a much larger population, Germany’s GDP in 2016 was 2.7 times that of Russia!”

Competition is not only good in itself, it is the means by which other basic Western values such as individual freedom, equality of opportunity, and hard work are protected. Competition protects the freedom of the individual by ensuring that there is no monopoly of power.

In contrast to one, all-powerful government, many businesses compete against each other for profits. Theoretically, if one business tries to take unfair advantage of its customers, it will lose to competing business which treats its customers more fairly.

When many businesses compete for the customers’ dollar, they cannot afford to treat them like inferiors or slaves. A contrast is often made between business, which is competitive, and government, which is a monopoly. Because business is competitive, many Americans believe that it is more supportive of freedom than government, even though government leaders are elected by the people and business leaders are not.

So you can make a strong case then, that competition is as important, or even more important, than democracy in preserving freedom.  And competition need not preclude cooperation; it can also create a beautiful Symphony of sound.

That’s my rant for today.  I hope you had a great Christmas and New Year’s!